The Departed, which garnered great reviews, is actually stolen from the work of Hong Kong action film masters, Wai Keung Lau and Siu Fai Mak, specifically their brilliant 2002 film, Infernal Affairs. This version is set in Boston and stars 'it' boy Matt Damon, former 'it' boy Leonardo DiCaprio and I-only-know-one-way-to-act-and-do-the-same-character-everytime, Jack (yawn) Nicholson. I don't know about you but I'm so sick of Jack Nicholson and his one-dimensional acting that everyone thinks is so wonderful.

That all said, this movie directed by Martin Scorsese, is engaging (if terribly violent). I disliked it thoroughly but have to admit this is more because I dislike Nicholson so much. So blatant bias aside we have rookie cops DiCaprio and Damon joining the Massachusetts Police as moles of big bad Irish mob-guy Nicholson. DiCaprio plays the double agent role (working for Nicholson but actually working for the good guys) while Damon works for the cops but is actually on Nicholson's side. Two long sad hours of violence later, and with Nicholson finally gunned down, we reach the reason for this film: the Damon and DiCaprio denouement facing each other on a rooftop and in an elevator. Course, both end up dead and we're left thinking (or was it only me?): 'Yeh, so, what's the point of all this?'. 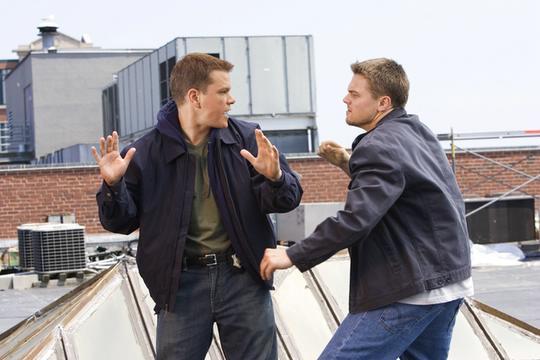